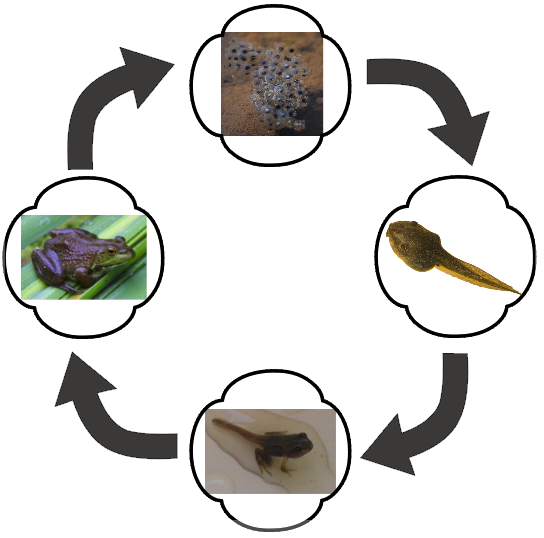 The frog is yet another creature with an advanced life cycle. It, like the butterfly, will under go several distinct changes as it matures and grows.

Stage 1: The Egg
The first stage in the frog's life cycle is the egg. The female frog will lay her eggs in a pond or other body of water. The female lays many, many, many eggs. This mass of eggs is called a spawn. The egg look like tiny balls of jelly. The eggs will hatch in 6 to 20 days. Only the lucky ones will survive to hatch!

Stage 2: Tadpole
Once the eggs begin to hatch the tadpole emerges from its jelly like enclosure. The tadpole eats its own egg as part of its first meal. Because the tadpoles are very delicate at this point they will stick themselves to weeds or each other. They do this to help protect them against hungry predators! In 7-10 they are strong enough that they will begin to venture out and find their own food.

Stage 3: Froglet
At this stage the tadpoles have lost their gills and have developed tiny teeth to help them grate their food. They are also beginning to make some remarkable changes to their bodies. 6-9 weeks from the beginning of their life they sprout tiny legs. The froglet will continue to develop and by the end of 12 weeks it bares no resemblance to the tadpole it started out as. It now looks like a from, only with a small tail. But don't be fooled this tail will eventually disappear completely and it will become a frog!

Stage 4: Adult Frog
At this point the frog that began life as a tiny ball of jelly has gone through some amazing changes on its way to becoming an adult. Now it will look for a mate in order to begin the life cycle all over again!